When sipVine Inc. launched in 2005, voice-over-internet protocol wasn't a common term and getting customers on board required some education.  "It was a lot different sale back then," sipVine co-owner and vice president of sales and marketing Mark Greim said.  Flash forward to 2016, and VoIP is the way businesses are going, he said. 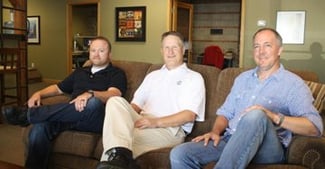 The North Kansas City-based hosted VoIP phone service company has experienced revenue growth every year, and in 2015, it had a 30 percent revenue boost.  It's now a multimillion-dollar company — and growing, CEO and co-founder Bob Conner said.  "The first half of this year has been our best ever," Conner said.

Beyond revenue growth, sipVine has outgrown its 2,500-square-foot space and is looking for a new location. sipVine employs 12 and plans to add three to four employees in the near future in sales, operations and tech roles.  A number of factors are driving the growth, including referrals and ramped up marketing efforts. sipVine also gained a number of clients with multiple offices, and sipVine is supporting all of them. Its largest client has about 100 offices.  "Five, six years ago, I never dreamed we'd have clients that would have 600 or 700 phones with us. We are gaining those every year, which is great," Conner said.

When sipVine first launched, servicing clients from coast to coast wasn't an option. But about five years ago, sipVine built out its system to serve area codes outside of 816 and 913, said Colin Wells, co-founder and chief technology officer. Its system can now serve 96 percent of the United States.  "When you're a telecommunications company, such as AT&T, Verizon and CenturyLink, you have territories, so you really can't go coast to coast. … Within the VoIP world, providers like us can go national," Greim said.

A company that once used multiple phone companies for its offices can now use one provider: sipVine.  "We have clients that have 20 to 30 offices from Washington, D.C., to Los Angeles. (They) had a bunch of different companies they worked with in the past for service and all these separate bills. Now they just have one bill and are able to see a great savings (because of the economies of scale)," Conner said.  Having every office under one phone system offers advantages, such as having extension to extension dialing and the ability to centralize or decentralize certain functions, such as receptionist duties. It can maximize resources and time, Greim said.

Another growth driver has been sipVine's focus on customer service and customization, which has spurred a number of companies to leave major VoIP providers and opt for sipVine instead, Greim said. sipVine customizes the phone system to meet the needs of each client and designs an efficient call flow.  "Frankly, there's not another phone company out there that can customize to their client as much as we can," Conner said. "Customer service is definitely the main differentiator for us."

sipVine provides a direct hotline for customer service and doesn't use an automated system.  "We're friendly. We joke around with people a lot. When you call us, you get someone right away. … If you call AT&T (for example), you're going to have to go through a bunch of menus," Conner said. "When you call us, someone answers, you get us and we talk to you."  Customers aren't given a service ticket, where they have to wait for the next step to resolve an issue.  "The person you talk to is the person who can provide the resolution," Wells said.

sipVine's industry excellence and technical expertise spurred Google Fiber to name the North Kansas City company a "Google Fiber Tech Partner" in 2015.  "We're one of just a few in the nation," Conner said.  Through the relationship, both companies provide each other leads. Thanks to Google Fiber, sipVine is gaining clients it otherwise wouldn't have gotten, Conner said.  "A lot of people have heard about sipVine, but not everyone," he said. "But everyone's heard of Google and Google Fiber. When you're able to put that in a sentence with your name, it provides you a lot of return and a lot of credibility."

Leslie covers retail and restaurants, and creates Web stories and other online content.

The Premier VoIP Business Phone Service for Companies in the Kansas City Metro and Nationwide.