As Google Fiber continues with its construction of a fiber network and expands its business internet service to additional cities across the country, businesses of all sizes are preparing to reap the benefits of superfast internet speeds and expanded capacity.  Normally, these superfast speeds will approach 1000mb/s.  Traditional bandwidth providers are responding to Google Fiber with speed expansion and lower prices of their own.  Competition in this area is benefitting businesses and they need to be ready to take advantage of it. 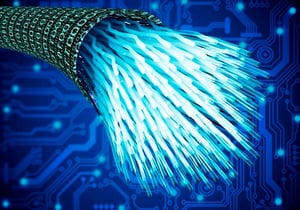 Gigabit internet capacity will allow businesses to do business differently, especially those who have been stuck with lower speed internet service due to availability or affordability.  Obviously, sipVine and other Hosted VoIP providers would suggest that it is a great time to join the movement to VoIP services.  But, there are many other applications that can come into play for organizations, such as cloud storage and backups, cloud applications, and other remote hosting opportunities.  Many such applications will save businesses money, remove disaster risk, and open the door for outsourcing of other activities.

First, we need to clear up some misconceptions associated with moving to gigabit internet speeds.  Many businesses are of the belief that moving to internet speeds close to a gigabit/second will make their internet utilization operate at lightning speed.  Unless the internal network infrastructure is addressed, this is simply not the case.  Moreover, even with infrastructure upgrades, downloading files and streams will only move as fast as the responding web server will allow.  A better way of looking at your superfast internet connection would be that it allows your organization to have more capacity to access applications, download information, and perform other internet activities across all workstations at the same time without concerns over saturating the internet circuit and creating slowdowns.

Thus, there are several areas of consideration for network infrastructure improvements to prepare your organization to take advantage of superfast internet speeds.

Realizing that many SMBs do not have on site IT resources to help prepare your organization for this conversion, it will be advisable to work with consultants who can effectively guide you through this infrastructure upgrade.  In the cities where Google Fiber is present, there are IT and VoIP providers, such as sipVine, who have been certified as Google Fiber Tech Partners.  These companies can assist you in this decision making, and many have applications as well that will allow you to fully take advantage of your superfast internet speeds!